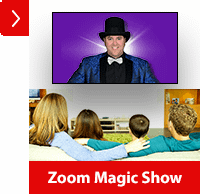 When a magician finds out that Jeff McBride is my mentor, the first question they as me is, “what’s it like working with Jeff McBride?”.  Jeff is the biggest reason why I became the Best Magician NYC.

Working with Jeff McBride is a dream come true.  He has mentored many famous and renowned magicians, such as Mat Franco, who won America’s got Talent.  Most recently, three of Jeff’s students came in first place in their respective categories at FISM for the World Championships of Magic.  When the three Champions were interviewed directly after their victories, the first person they thanked was Jeff McBride.  They said they could not have become a champion without his tutelage.

Jeff is not just an ordinary person.  Everything he does is magical.  If you were a guest at his house, Jeff would make you pancakes for breakfast and put on a whole show before you even had your first slice of bacon.  He would make your pancakes disappear, reappear on the ceiling, and make your spoon bend in half with his mind.

Jeff is so proud of his students.  he looks at all of them like an extension of their family.  He is equally as proud as if you were to learn a new cups and balls routine for the first time or if you were to win America’s Got Talent. Jeff is very proud of all his students regardless of their ability, where they live, or how much money they have.  I have never had a mentor or coach like this before.

Jeff’s knowledge of Magic is so vast and extensive that he is well beyond being a genius or a savant.  He reads ancient Magic books for half the day in his reading room.  When David Copperfield buys an age-old magic trick that is hundreds of years old and doesn’t know how to operate it he contacts Jeff McBride, and Jeff tells him how to perform the Magic.

Jeff is an amazing networker, and if you ever need to learn a new trick, he doesn’t refer you to a book or a Magic shop; he CCs you on an email to the person who invented the trick and has them teach you.  The inventor is always incredibly happy to hear from you.

There are many different types of magicians in the world.  There are card manipulators there are illusionists there are mentalists there are comedy magicians, and there are close-up magicians. Jeff can literally do it all.  He is a jack of all trades, which is extremely hard to find in the Magic community.

As your mentor, Jeff will focus on the skills you do best.  In the beginning, when I started working with Jeff, he recognized that I had a unique skill set different than most other magicians.  He said Andy, your skill is your personality.  You have a love for people and the world.  You practice random acts of kindness, and Magic is how you make the world a better place.  It doesn’t matter what trick you do when you perform.  All that matters is that you’re on stage entertaining.

A year ago, I was about to buy an illusion for my Vegas magic show for over $10,000.  It was over 10 ft long and weighed hundreds of pounds.  It would make me reappear and disappear in the blink of an eye.  I was so excited to have the opportunity to buy it.  But Jeff told me not to buy it and how it was a waste of money for me.  I told him how I didn’t understand. Jeff said, ” Don’t forget your gift is your personality; if you want to spend thousands of dollars, get nice speakers and audio systems and microphones, so people can hear you better.” Jeff saves me thousands of dollars by advising me not to buy junk I do not need.

It’s a great pleasure working with Jeff McBride.  I am constantly in contact with him through email and Facebook Messenger.  He helped me become the Best Magician NYC.  I cherish my meetings with him every month over Zoom.  Behind every great Magician, there’s a unique and powerful woman.   Abigail McBride is also an incredible magician, singer, dancer, and mentor. I’m fortunate to have Jeff McBride and his wife, Abigail, in my life

I could not have had the success I’ve had in the past three years and become the best Magician NYC had it not been for Jeff McBride. I would never have been named “America’s top Comedy Magician” by Facebook, never have broken a world record, and never have had the energy and belief to audition for the Jimmy Kimmel Live on ABC.

I searched for years to find someone to help me become the best Magician NYC and take my Magic to the next level. Jeff has been that person.  If you want to become a magician or a much-improved magician, I highly recommend working with Jeff McBride and the Magic and Mystery School in Las Vegas, Nevada.  They are sensational, extraordinarily accessible, and kind people.  They will change your life and make it more magical.

EXCELLENT Based on 61 reviews

Magic Eddy
Andy is an incredible Magician. I have seen him perform multiple times at the world famous Magic Castle. He always keeps his audiences on the edge of their seats. In addition to his amazing Magic he is also hilariously funny. His dedication to his clients and passion for Magic is unbelievable. I am so lucky to have him as my colleague.

Jamie The Magician
I have always enjoyed Andy's magic. Andy Is the type of entertainer that you want. No headaches and very professional. His magic is slick, stylish and unforgettable. if you haven't seen Andy perform, you're missing out.

43MVesper
"Amazing" is truly the only word to describe the type of experience Andy brings to you and your family with his virtual magic shows. He recently performed for our school's annual Fall Festival and was such a natural with our students. Andy's charm and humor pale only in comparison to the quality of his work. If you're looking for a new, fun, and interactive experience (especially to share with friends/family), you absolutely MUST book one of Amazing Andy's virtual magic shows!

Robert Baxt
This guy was great! Super fun and everyone loved him!

Crates McD
Andy is a consummate showman, with an outstanding flourish for detail and a true love for the art of prestidigitation! When you hire Andy, you're bringing on a professional who works with you every step of the way to cultivate the perfect experience for your special occasion. Andy's got great jokes, a terrific rapport with the audience, and some truly unique illusions that will leave EVERYONE guessing. Look no further: this is the magic act you've been looking for!

Adam Gertsacov
Andy is a good guy, and that shows up in his magic. His tricks are good, but what really impressed me about his show is his persona. As a family performer, Andy really makes everybody at the show feel comfortable and everybody leaves the show with a good feeling. I highly recommend him.

Andy Dalzell
Best Zoom Magician I have ever seen! Andy is an Amazing Zoom Magician. There is a reason why Samsung, Adam Cheyer, the Creator of Siri, and the Great Throwdini work with him. Hire him when you are looking for a Zoom Magic show.

Mary Martin
Amazing Entertainer. I've hired Andy 5 times and his Magic is always different and incredible. There is a reason why David Blaine and Penn & Teller consult with him. I'm looking forward to seeing him on March 3rd. He is an amazing talent. He is also a wonderful keynote speaker and motivational speaker.

Edward Nista
Coporate hired Andy Peters for the annual holiday party this year. His talent as a magician and all around entertainer made this year’s bash one to remember. If only we could keep this guy on retainer!